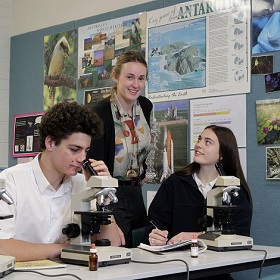 New data has revealed that individual NSW schools will be denied up to 90% of their Gonski funding for 2018 and 2019 under Malcolm Turnbull’s new schools funding plan.

It brings home the cost of cuts to Gonski – fewer resources means fewer extra programs and less in-class support for students who need it.

The Federal Government has released a funding calculator, which shows how much it claims schools are likely to receive under its new funding model in 2018.

What it actually shows is how little its new funding model will deliver to schools compared to the Gonski Agreement signed with the NSW Government in 2013.

Across NSW schools will lose $846 million in 2018 and 2019 alone, and the NSW Government says the figure will rise to $1.8 billion over the next four years.

What does that mean for your school?

Check out this table for a direct comparison, and to see what the difference is – the figures for the Gonski Agreement have been put together by the NSW Education Department.

State governments want the federal government to honour the full six years of the Gonski agreements, and it becomes clear why when you see how much their schools are set to miss out on.

These are big differences – often in the hundreds of thousands of dollars and they represent real programs that will be lost, or won’t be able to be extended to cover all students who need them.

These cuts will affect schools like Rooty Hill High School or Hayes Park PS which are delivering improved results for students using their Gonski funding.

In some cases these schools are getting a bigger funding increase for 2018 than high need public schools.

But this isn’t an anomaly – it’s what happens when you move away from needs-based funding, and the recommendations of the Gonski Review.

Under Malcolm Turnbull’s plan, just over half of the extra federal funding over the next ten years will go to private schools. Compare that to the Gonski Agreements which would see 80 per cent of extra funding go to public schools, because they have the greatest need.

Due to the federal government’s favouring of private schools 84% of public schools won’t reach the Schooling Resource Standard by 2027.

That means many schools will never get the resources they need for their students.

The NSW Government has been a strong supporter of Gonski funding, and has already said it wants Malcolm Turnbull to honour the Gonski Agreement in full.

We need Premier Gladys Berejiklian and Education Minister Rob Stokes to keep up the fight, right through to June’s COAG meeting.

We can’t let Malcolm Turnbull get away with cuts to Gonski which will hit disadvantaged schools the hardest.

Sign the petition below calling on them to stand up for our kids and ensure the federal funding is delivered in full.

Want to know more about Gonski?